Beginning with the 2019 Fall harvest the online market has seen a new type of Cannabis for sale. CBG (Cannabigerol) hemp flower refers to the female flowers of hemp plants that are bred to produce primarily CBG rather than CBD.  The flowers actually contain CBGA – the acid form of CBG (just as THC flowers contain mostly THCA and CBD flowers contain mostly CBDA). Heat is needed to convert these acid forms of the cannabinoids to their bioavailable forms (without the A).  Most people know about marijuana flower, often called bud. CBD hemp flower is also becoming popular since the 2018 farm bill legalized it. The difference between these plants has to do with the dominant cannabinoid that they produce. Marijuana flower is highest in THC, while CBD hemp flower is highest in CBD.  The new flower is highest in CBG. 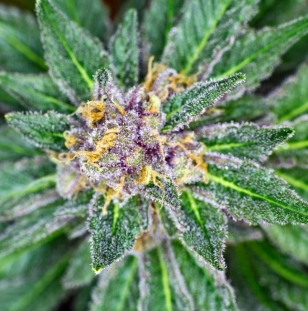 CBG is sometimes referred to as the “stem cell” cannabinoid.  Cannabis plants produce CBGA relatively early in their lifespan and much of it is converted to THCA and CBDA as the plant matures. Plant scientists have bred new strains of cannabis where this conversion has been blocked. Flowers from these plants are high in CBG once the plant material has been heated (decarbed).

When using cannabis medically the goal is to consume enough to get symptom relief without becoming intoxicated or impaired. THC flowers (marijuana), when consumed in enough quantity, make you high (intoxicated). CBD flowers relax you without making you high. CBG hemp flowers are drier than the more traditional CBD flowers and they produce different effects, which are difficult to describe.  If THC gives you a “head high” and CBD gives you a “body buzz,”  then CBG might be said to give you a “mind-body buzz”.  Some users report that CBG flowers enhance the effects of CBD when both are consumed together.  These CBG flowers are so new (as of this post in November 2019) that there is no real consensus as to their effects. Some early users of CBG flower report a clear-headed sense of relaxation without the sedation that accompanies some CBD flowers, but others do report sedation. As with all cannabis, the terpene profiles may also influence the effects. CBG itself is known to fight some forms of cancer, to reduce intraocular pressure, and to fight some infections.

I believe we are still in the early days of understanding these natural healing substances. Hemp that is high in other cannabinoids may be right around the corner.  Innovative companies like PotLuckExpo and Kanabia are already offering hemp-based products featuring exotic natural cannabinoids such as CBG, CBN, and THC-V.  I have updated the shopping section to include note of places to buy GBG Flower Online.

We also have information on how to decarb CBD hemp flower.

Before Covid I worked with chronic pain patients as a clinical psychologist. Many of them reported significant relief from cannabis and CBD. I was ready to retire anyway, and the pandemic hastened my retirement. I have been studying cannabis for several years and used CBD products for my own chronic pain. THC has been illegal where I live, but was recently approved for medical use. View all posts by cannabispharmacy

This site uses Akismet to reduce spam. Learn how your comment data is processed.